Sri Ganganagar covers a total area of 1,115,466 hectares. The city is surrounded by Hanumangarh District in the east, Bikaner District in the south, Bahawalnagar district in Pakistan on the west and Punjab on the north. 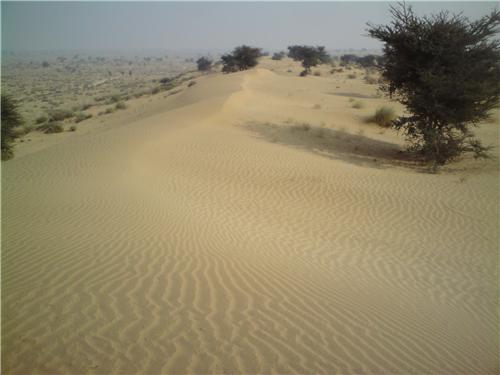 The north-western part of the district is irrigated by the Ganga canal. Amidst the greenery you can also find sand dunes. The Sri Ganganagar district lies in the great Thar Desert. The agricultural area is irrigated by Bhakhra canal and Ganga canal tributaries.

The Naali belt of the Ghaggar River is a narrow basin. This is the main river of the region with seasonal rivers flows during the rainy season. The river enters the district near Suratgarh and flows into Anoopgarh, Vijaynagar and Jaitsar, thereafter it flows into the Indo-Pak border. The high sand dunes or 'Uncha Tibba' area of Suratgarh tehsil is also known to be the “real desert” area.